This is a difficult question to answer because there are so many variables and a few important unknowns.

For starters, who is to say what makes one RTP good and another bad? Another issue – slot manufacturers aren’t great at releasing specific RTP figures for their games, and casinos are even less likely to let players in on their industry secrets.

Yes, we can make some general statements about slot machine RTP numbers, but we can’t always say “this particular machine has a better RTP than this other machine,” since most of the real-world numbers we have are averages based on geographical areas.

This post is all about trying to answer the difficult question of what makes a slot machine’s RTP good or bad.

Let’s keep it simple – RTP means return to player, and it describes the percentage of all the wagered cash a slot will pay back to players over time.

RTP is a theoretical figure affected as much by random chance and volatility as any other bet in the casino. One player may see an exact 95% RTP return during their session, while another player actually wins $10 over time while they played.

RTP is not a literal prediction of a player’s mathematical chances of winning and losing. RTP requires an infinite number of plays over an infinite period of time to replicate reality. Over the short term, you’re just as likely to lose as to win. 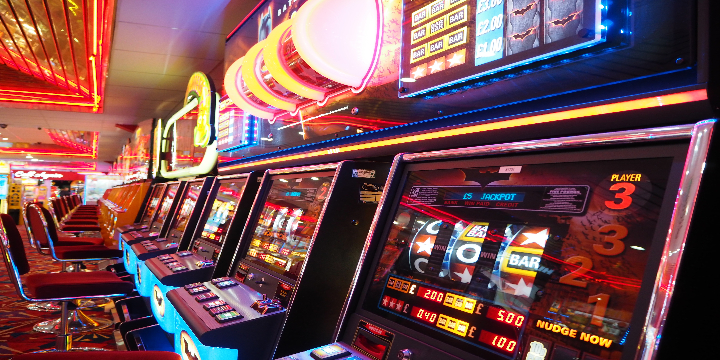 I came up with a wide range of possible real-world slot machine RTP figures. Ready?

I’d say most slot machines have an RTP set between 70% and 99%. You’d be hard-pressed to find a slot set below 70%, and I’d put money down that there’s never been a slot programmed to payback as high as 100%.

I came up with these numbers after a lifetime of experience in gambling, writing about gambling and probability, reading press releases and white papers on slot machine tech, and talking to people a lot smarter than me, some of them casino and gambling professionals.

This post will explain how I came up with that number, what it means to players, and a few other things about slot machine return-to-player figures I’ve learned over the years.

A slot with a negative RTP would be awful – that would mean that losing would cost you more than the bet you placed. However, slot machines can’t demand more money from you than what you’ve already agreed to gamble (at least, not yet), so that’s not truly possible.

Theoretically, the worst possible slot machine RTP would be 0%. That would mean that the game is likely to take your entire stack very rapidly. Nobody would play it, since there’d be no wins, only losses. It’s a ridiculous possibility and it would never happen. But theoretically, I suppose it’s possible.

In the real-world, you rarely hear about slot machine RTP figures below about 70%. I know that slot machines in bars and airports and places like that, non-traditional gambling spaces, have RTPS in the low-to-mid 70s, and I’ve even seen RTP figures posted in cruise ship casinos in the high-70s.

The casino bets with the best odds can be played with a positive expectation; that means the theoretical RTP for that bet is above 100%. A game of full-pay Double Bonus Poker, played according to optimal strategy, gives the house an edge of -0.17%. Thanks to the doubled payout for a 4-of-a-kind, and provided the player doesn’t make any strategy mistakes, the casino is theoretically losing money on this game over time.

The best possible RTP for a slot machine would be something with a positive expectation – in other words, a number above 100%.

If you found a slot machine that paid out the same as that Double Bonus Poker game from above (100.17%) you might even be able to play slot machines professionally. If you’re betting $10 per spin, that’s $0.016 in expected profit per round of slot play. At 600 spins per hour, you’re looking at an hourly wage of $9.60. You’d have to play non-stop for like ten hours a day to make any kind of living wage, and variance means you’d have as many good days as bad. But I suppose it would be possible.

Unfortunately, that’s a fantasy, a pipe dream. It’s not reality. First of all, there is no optimal strategy for slot machine play – it doesn’t work like that. Second, no slot machine giving the house a disadvantage would ever make its way to the casino floor.

If a machine like that did make it to the floor, it seems unlikely that the casino would let you bet $10 per spin. They’d keep it super-low, more of a novelty than anything. You might think of it like single-deck blackjack or European Roulette in Tunica – available, but with limits on the casino’s liability. If the casino offered this game and set the max bet to $1 per spin, your profit expectation drops to $0.0017 per round, or just over $1 an hour.

Let’s be realistic and consider in the next section what a real-world high RTP slot machine looks like.

What’s the Highest RTP Slot Machine in a Real Casino?

When you poke around online for high RTP slot machines, most of what comes up has to do with online slots. I have nothing against online slots, and I’ve played a few of them in my day, but I don’t think most readers are truly curious about online slot machines.

It’s difficult to talk in specifics about slot machine RTP in brick and mortar casino. Manufacturers aren’t required to release this information about their games, and the ones that do often provide multiple layouts for casinos to choose, which means players won’t ever really know what version they’re playing, meaning which RTP configuration they’re up against.

Having said that, publicly-available data released by state gaming boards can give us some sense of the average RTP figures for slot machines in different geographical areas.

Let’s start with Las Vegas. Average RTP for Las Vegas slots varies a lot depending on where in town you play and what denomination you choose. Average figures range from 86.4% (for $1 Megabucks games in the Downtown area) to 96.3% (for bets on $0.05 slots on the Boulder Strip). As far as which part of Vegas has the highest average RTP for slots – that’s the Boulder Strip, where the average slot payback is 94.26%. Using this information, slots players interested in playing slots with the highest-possible payback figures should stick to nickel slots on the Boulder Strip.

Generally, the denomination of a slot tells you something about its RTP.

Penny slots tend to have the worst payback of any slots on the floor – the casino has to take a bigger bite since the wagers per spin are relatively small on penny slots. Typically, $0.01 denomination slots have RTP figures in the mid-to-high-80s, though penny slots with RTPs in the 70s are also common.

The opposite side of that coin – the higher a slot’s cost, the higher its RTP. Casinos can be a bit more generous to players pushing $10 or $20 into a high-limit slot.

Another rule of thumb in terms of slots and RTP: progressive games will always give the casino a bigger edge than non-progressives. The additional cost of each bet goes to fund the ever-increasing to prize that progressive slot fans love to chase.

A slot’s location (where the game is physically located) can offer some clues, but they may not be what you assume. Slot machines in non-traditional gaming spaces (think airports and hotel lobbies) tend to have the worst-possible odds. McCarran Airport has notoriously awful slots with average RTP figures in the low-to-mid 70s, regardless of denomination.

The same is true for slot games in flashy A-list hotels and resorts. Basically, the biggest names in Vegas know they can rip their customers off a bit more and get away with it. Year after year, the highest average RTP games are found in smaller spots, like highway casinos in Oklahoma or far-off-Strip casinos in Vegas.

I’d say that you shouldn’t expect to find a slot programmed to pay back 100% of the money paid into it over time. The main reason is that the casino wouldn’t see any value in taking up floor space and running maintenance and drinks service on a machine that won’t necessarily always make them money.

Another reason you’d never find a game like this is that it’d be boring. It’s either so non-volatile that it plays like a slow game of Pong, or it pays out winnings so small that you don’t even notice them.

The scuttlebutt among guys like me who obsess over things like slot machine RTP is that the highest you should expect to find is a 99% RTP slot. You can find plenty of online slots that advertise a high RTP like 98% or 99%, though I’m not sure you can absolutely confirm that the particular slot you’re playing at the particular online casino where you do your play is the 99% configuration as advertised.

I’d say a good RTP for a slot machine is anywhere in the 90s, but that’s my personal opinion. You may only approve of games in the high-90s, thinking like an advantage gambler, wanting to put your money up against the best possible odds. Or maybe you prefer penny slots, so you don’t mind playing slots in the 80s.

The trick is to match your budget and your expectations to the slots on offer at your area casino. There’s usually a game for every budget, and while you may not know the specific RTP figure for a particular game, you can make some assumptions based on the game’s denomination, style, and location.