Most people learn and play Spades in a casual way. The game is passed down from one generation to the next, usually with a slate of family rules to go along with it.

Modern-day Spades is a more serious venture, with online play spreading the game to millions, and big money prizes available in Spades tournaments from coast to coast.

This post is all about the game of Spades – what it is, how to play, and how to gamble real money while playing.

A History of Spades

Spades as it’s played today by millions of people all over the world is a traditional trick-taking card game typically played in partnership. The object of Spades is to take the number of tricks bid, no more no less.

Spades is a distant relative of Whist, meaning it is very similar to games like Hearts and Bridge. It also gives it a similarity to the classic dominoes game Texas 42. The biggest difference between Spades and games like Whist or Texas 42 is that one suit (spades) is always trump, whereas in other trick-taking games, it’s customary for the highest-bidding partnership to declare the trump suit.

The exact origins of Spades are a little mysterious, but smarter people than I have determined that the game was created by college students in the Cincinnati area in the late 1930s. There was a huge contingent of Bridge and Whist players at Xavier and the University of Cincinnati during those years, and it’s assumed that Spades developed as a faster, sleeker variant of those trick-taking classics. 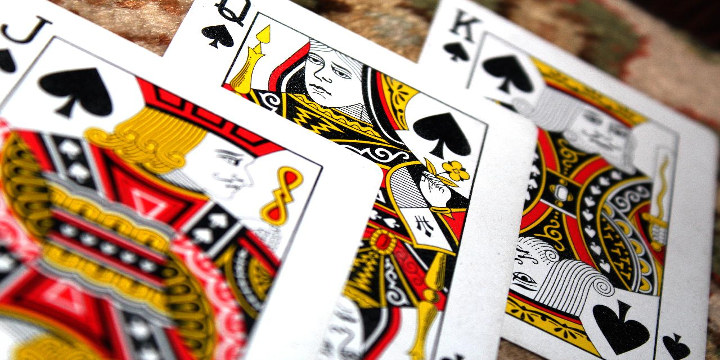 Games created ad hoc in the late 1930s had a funny way of making their way around the country and then around the world – there’s just something about a massive world war that really brings people together. Not only did soldiers share photos of their girlfriends and stories of their high school sports exploits, but they also taught each other their games. Spades caught on in a big way, as did many variants of dominoes and other simple betting games.

These days, the easy access to online Spades means it’s a global game, and national competitions (once relegated to the US and Canada) are popping up annually by the dozen. America’s various large-scale Spades tournaments hand out hundreds of thousands of dollars in prizes.

For my part, I learned the game like most people in my part of the country – from my parents and grandparents, sitting around after a crawfish boil or roasting marshmallows around the remnants of an outdoor barbeque. Spades is by far an amateur pursuit, with house rules as localized as house recipes for tomato sauce.

My cousins and I used to put up a few bucks on the overall winner of a round of Spades play. Larger-scale gambling no doubt goes on in various parts of the country. How can you gamble while playing the traditional playing card favorite Spades?

I’ll start with a basic guide to the rules and traditions of the game.

In a traditional partnered game, the partners sit across from one another. Deal and play move clockwise.

Cards are shuffled and dealt singly, face-down, beginning with the player to the dealer’s left. Each player should get 13 cards.

Each player analyzes their hand and makes a bid. Each partner’s bid is added – the total is the number of tricks they have to win to earn points. Players can bid nil, meaning an attempt to earn no tricks. Attempting a nil hand earns extra points if successful but incurs an extra penalty if it isn’t.

Spades are always the trump suit.

Play begins to the dealer’s left and can be any card except a spade. Players can’t lead spades until someone plays a spade or they have nothing left in their hand to play.

If a partnership wins exactly the number of tricks they bid, they win points equal to 10x that number of tricks. In some games, overtricks (any tricks won beyond the bid) count for just one point instead of 10 – in other games, teams are penalized by one point for each overtrick. These are known as sandbags and are to be avoided.

Partnerships that don’t make their bid lose 10 points for each trick they failed to win.

Traditionally, partnerships win by being the first to reach 500 points, though any point total can be used. A 100- or 200-point game will move relatively fast but be less volatile overall, while a game to 500 or 750 points will likely have more ups and downs and take a while longer to complete.

Traditions surrounding the game abound, as do house rules. In some variants, two jokers are added to the deck, and are considered the top-ranking spades. Other games turn all four 2 cards into low-value spades. There’s a card-passing element to some house rules versions as well.

Before you jump into someone else’s friendly game of Spades, be sure you understand the house rules in play.

How is Spades Played for Money?

Colloquially, people sometimes play Spades for money just by betting on the overall outcome of a game to a specific number of points. This is really common in my own family – we thought my grandfather was the world’s greatest Spades player, mostly because he promised to pay us $100 if we could ever beat him and my grandmother. That’s one way to bet on Spades, to just put up an amount of money to be paid out to the winner.

If you’re interested in tournament-format Spades, the country’s largest tournaments use a double-elimination format, promising a two-game minimum, with winner’s and loser’s brackets, and top prizes that range from $5,000 to $20,000.

Is betting on Spades legal? In the US states that honor private/social gambling rights, you’re not breaking any laws by involving a little bit of cash in your friendly Spades game, especially if that game is played in private and in a totally non-professional manner. Basically, betting on Spades for quarters at a family reunion is not the kind of illegal gambling activity that state gambling laws are designed to interfere with.

Here’s some quick tips to immediately improve your Spades play, an important factor when playing Spades games for real cash.

Bidding perfectly on your hand is an art that requires some practice and a lot of effort.

But right off the bat, you can be better at estimating your hand if you follow a few rules of thumb. Mainly, you need to look at your high cards and your trump length. Each of the game’s highest-value cards are worth a trick – here we’re talking about Aces and Kings. You should also give yourself a point for every three low-value spades you hold.

With some practice, you’ll get better at estimating the real point value of any hand you’re dealt.

Open With Your Partner in Mind

Since you can’t legally communicate with your playing partner, you have to use your moves to let them know information about your hand – info that may be useful when they choose their own strategy.

For example, if you hold ace-king of a given suit and you want to let your partner know you have the ace, you can lead with the king. This will tell your partner that you have both cards after revealing only a single card from your hand. This works in all directions – leading with the highest possible card of a suit is a message that you’re short-suited in this context.

One of the big dilemmas in Spades is whether to lead with trump or not. Here’s a powerful strategy for knowing exactly when you should lead the trump suit – when you’re holding a lot of spades. If you’re light on spades, a lead doesn’t make as much sense, and might send the wrong message to your partner. If you lead with spades, your partner will get the message that you’re holding a lot of them.

You may never bet a dollar on a game of Spades, or you may be skilled enough to want to try your hand at a national tournament for a $225 registration fee.

The point of the game of Spades is to have fun – that’s the point of all of these games of chance and skill that we gamble on. You don’t have to bet on the outcome of a game of Spades to appreciate it, but the bet certainly raises the stakes and interest level.