Video poker is a popular modern casino game based on traditional poker rules. It’s also one of your best gambling options.

Video poker is known for offering players a relatively high RTP. In fact, when played according to basic strategy advice created by players much smarter than you and I, some variants of video poker give the player a slight advantage over the casino.

This post is focused on Aces & Faces video poker, with a guide to the rules, the pay table, and notes on ideal game strategy. 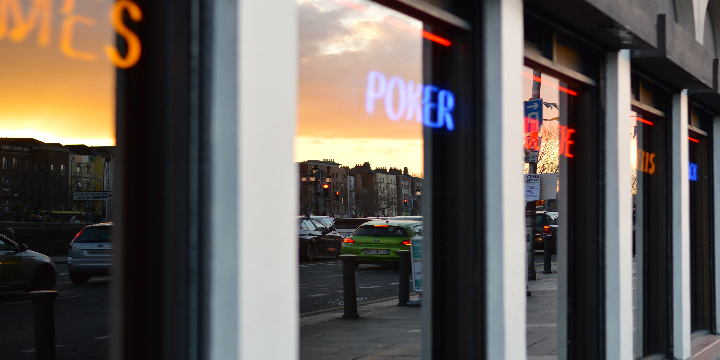 If you want to play Aces & Faces video poker games, you have to know the basics of playing video poker.

It’s called “video poker” though it could easily be called machine poker. The video part of the name refers to the fact that the game is played on a video screen. You play the various forms of video poker games on machines that look similar to slots – there’s a chair, a screen, and some posted information about game rules and payouts.

A video poker player’s goal is to form winning poker hands out of the group of cards they’re dealt. Most video poker games deal the player five cards, give players the option of holding between none and all of them, then deal out a second round of cards. The highest winning hand, as in poker, is the royal flush.

Each video poker variant has different payout amounts for different hands, and some have special rules that alter the way the game is played. Aces & Faces is just such a variant, based on the simple rules of video poker described above, but altered to enhance gameplay.

What Does Aces & Faces Mean?

When you see a video poker game called Aces & Faces, you can assume a few things about the rules.

First of all, the game is based on Jacks or Better, which is considered the standard variant of video poker.

Secondly, Aces & Faces has a different pay table than Jacks or Better, with payouts tied to different combinations of face cards and aces that aren’t available on that standard game.

Finally, Aces & Faces has a lower top payout compared to Jacks or Better. For a standard Jacks or Better game, players earn 800 credits for a royal flush. When you play Aces & Faces, you’re sacrificing that high top payout for a wider variety of medium-to-high prizes in the middle of the pay table.

Like all video poker variants, Aces & Faces uses a coin system, allowing players to play between one and five coins in the denomination of the game. On a $0.25 Aces & Faces game, bettors can wager between one and five coins, for a total bet range of between $0.25 and $1.25 per game. The pay tables for these games don’t change as you move up the per-coin ladder, though the payouts increase mathematically. Good game strategy means playing at max-bet, so if you can’t spend $1.25 per round, find a cheaper machine that offers a five-coin bet in an amount you can tolerate.

Note that the pay table below represents winnings for single-coin bets. To determine payouts for large amounts, just multiply the amount shown by the number of coins you’re betting.

As you can see, this game puts a premium on combinations of aces and face cards, particularly aces. A payout of 80 credits for four aces, whereas four aces in traditional video poker would only be worth 25 credits. In fact, the payouts for four of a kind are higher in this game as long as you’re dealing with face cards – 40 credits for a four of a kind featuring face cards rather than the standard 25 on Jacks or Better.

That’s where the name of the game comes from. A premium is placed on combinations of ace and faces cards.

Based on the pay table above, and provided a player follows basic strategy as outlined below, a player’s theoretical return would be 99.26%. A house edge of 0.74% puts Aces & Faces video poker miles ahead of the average casino bet.

Take note that some casinos alter the pay table above, and by changing the payouts very slightly the theoretical return to player changes drastically.

For example, pay tables that reward 6 for a full house instead of 8 are increasingly common, especially in casinos in Louisiana and Oklahoma. The theoretical return percentage on this “6/5 Aces & Faces” game is 97%, essentially giving the casino 4x better odds than the standard 8/5 Aces & Faces video poker game.

The first rule of playing Aces & Faces is to never break up a paying hand you’re dealt if that hand is a full house or better. The only exception to this rule is when you’re dealt 4 of the 5 cards needed to form a royal flush. In that case, hold and hope to be dealt the missing piece.

For all other cases, a simple set of rules exists to help Aces & Faces players make their best in-game decisions. These rules are based on the game’s pay table and have been worked out well in advance by the mathematicians that tackled casino gaming starting in the 1950s. Following this advice gives you the best chance of winning, though your actual results will vary.

The Strategy Chart for Aces and Faces

Bellow is the hierarchy of possible hand combinations, with the best possible result occurring at the top, and the worst possible result at the bottom. Players who aren’t dealt a paying hand or a hand one card away from a royal should play for the combination they can form with their dealt cards that’s closest to the top of the list.

Built into good Aces & Faces strategy are a few basic strategy tips for all casino gambling.

For example, you should always be sure you’re playing the best possible pay table for Aces & Faces that’s available in the casino where you’re playing. There’s no benefit to playing games at a pay table that doesn’t pay you out as much money as possible – multiple pay tables exist for this game, so you have the freedom to look for a game with a more player-friendly payout rate if you’d like.

Video poker is a common choice among advantage gamblers since the game has been broken by strategy experts a long time ago. By following the basic advice available for free online (and even for sale in some casinos), players can set themselves up to play some of the highest-odds games in the house.

Aces & Faces is a classic video poker variant that you’ll find just about anywhere you can gamble. Some players appreciate the additional payouts available for various card combinations, above and beyond what you find on Jacks or Better or other video poker games. Learn the pay table and follow the strategy advice I’ve shared, and you’ll enjoy rounds of classic video poker action at the best odds possible.